BusyCal can manage all your tasks (also known as to dos or reminders). Tasks can be displayed in a Task List and/or in the calendar on the date they are due.

To show the Task List, tap Task at the bottom of BusyCal’s main screen. 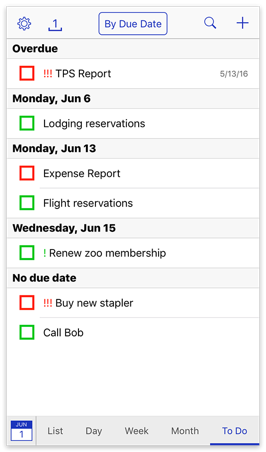 The Task List can be sorted by Due Date, Priority, Title, Calendar, Tag, or Manually. To change the sort order, tap the current sort order at the top of the screen (such as “By Due Date”), tap Sort By, and then tap the new sort criterion. 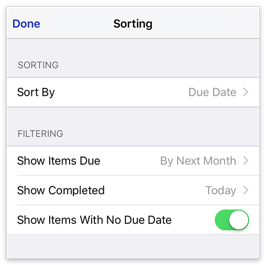 You can also set the following options there to filter the Task List:

Tasks in the Calendar 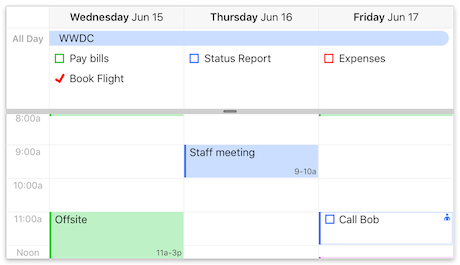 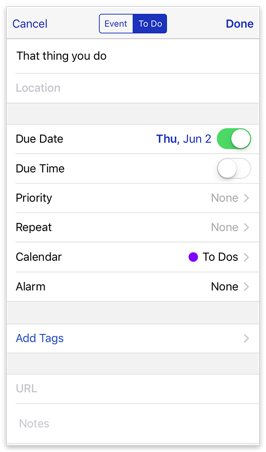 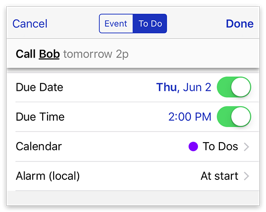 If you mark a task as completed by tapping the “done” checkbox in the calendar, Task List, or Event Details view, the completed task appears with a checkmark in front of it on the date that it was completed.

The following options are available for customizing tasks:

You can create tasks that repeat based on the due date (e.g., Pay Rent on the 1st of every month).

To create a repeating task, tap Repeat in the Event Details view followed by an interval: None, Daily, Weekly, Monthly, or Yearly. Then, if you want to set the end point for the task, tap End Repeat followed by Never (never end), On Date followed by the date on which you want it to end, or After followed by the number of times you want the task to repeat. 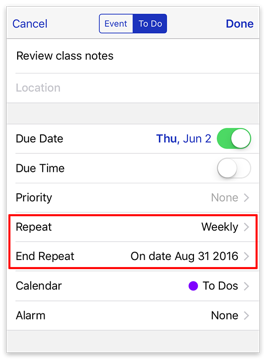 To dos in BusyCal sync with the Reminders app in iOS and OS X through iCloud.

Note: BusyCal does not sync tasks with Google Calendar. You can create tasks only on iCloud calendars, Exchange calendars, and CalDAV servers that support tasks.

The Reminders app on an iOS device with a cellular radio (all iPhones and some iPads) can display location alarms when arriving at or leaving a specified location. For example, you could create a task to “Pick up dry cleaning” that triggers when you leave the office. Although you can create location alarms in BusyCal for Mac or in the Reminders app for iOS or OS X, you can’t do so within BusyCal for iOS. However, BusyCal does sync and display any such alarms you created elsewhere.