Reminders is available as an app on iOS and macOS, which can include lists of reminders / to-dos / tasks. BusyCal can connect to Reminders directly for syncing these lists their container reminders.

This feature is only available in BusyCal 3 (macOS), v3.8 or above. For BusyCal iOS, please make sure you've upgraded to v3.5.2 or above.

IMPORTANT: Please go through the considerations and limitations listed below to understand what is and isn't supported.

BusyCal on any device below Catalina or iOS 13 will only see old, non-upgraded Reminders lists and tasks that will not sync with iCloud or other devices with more recent OS versions.

To sync BusyCal with Reminders, do the following: 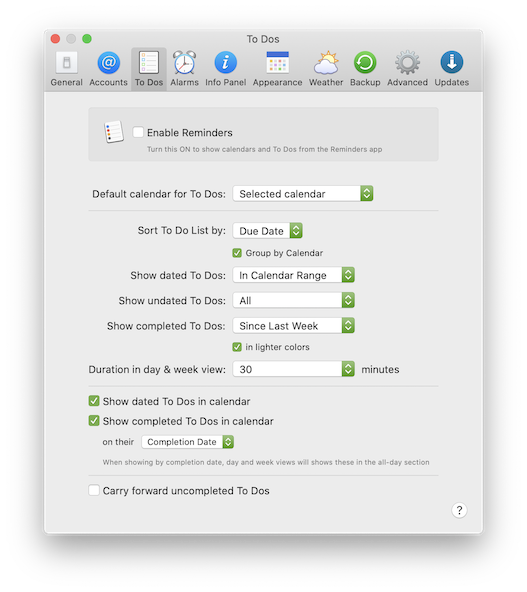 If you have not yet upgraded your Reminders app to the new storage format offered by iOS 13 and macOS Catalina, you may see duplicate calendars and tasks in BusyCal; one copy may be syncing from your iCloud account (if added to BusyCal), and one copy would appear to be syncing from the Reminders app. In this case, we would advise that you ONLY rely on the calendars syncing via your iCloud account and do NOT sync with Reminders separately, i.e. there's no need to use this new sync feature.

If you have already upgraded the Reminders app in iOS 13 / macOS Catalina, you may notice that changes you make in Reminders directly, or using the new Reminders Sync method in BusyCal, do not sync back to changes you made to Reminders in your iCloud account. This is important to understand (and discussed here): Reminders app no longer syncs to iCloud's CalDAV servers, and instead stores data into a special location inaccessible by the iCloud CalDAV server.

The side-effect is that you may see duplicated lists or tasks appear in both Reminders and under your iCloud (CalDAV account) in BusyCal, but changes will not sync between the two. These are two separate accounts, with two separate copies of unrelated data.

Thus, this new syncing method is only useful if you have already upgraded Reminders to the new storage format, and plan to use the lists in Reminders to sync data between multiple-devices. Enabling Reminders support in BusyCal will allow you to manage you lists and to-dos without requiring you to switch between apps.

You should stop ✋ using the To-Do calendars syncing via your iCloud account.

Using the new Reminders sync option in BusyCal will not help in this case, as BusyCal is limited to syncing with whatever Reminders.app can see on your mac. Similarly if you're on macOS Catalina but an older version of iOS (12 or below), you'll see the same thing - i.e. Reminders.app on both platforms show two separate sets of data.

One solution is to upgrade your mac to Catalina if you wish to continue syncing via Reminders.app. In case you do not wish to upgrade to Catalina, the other solution is to turn "Reminders Sync" off in BusyCal (Preferences > Accounts > select Reminders and delete account) and stick to syncing via iCloud CalDAV. You will first need to restore your iCloud Reminders that Apple deleted during the automatic-migration, and that should then push all your Todos via iCloud CalDAV instead. Here's how you can restore your Reminders.

If you're bothered by this, the only thing you can do is leave Apple feedback and tell them how this change has disrupted your workflow.

BusyCal attempts to sync all the information retrieved from Reminders, however the sync mechanism currently offered by the OS is somewhat limited to what it can and cannot sync. These limitations and caveats have been listed below.

Switching to Reminders from iCloud

If you upgraded to Catalina / iOS 13 earlier and chose not to upgrade your Reminders app to the new format (you're prompted to Upgrade when you first launch Reminders), your to-dos calendars still reside on the iCloud's CalDAV servers. If you wish to now utilize BusyCal's support for the native Reminders app, you can launch Reminders on any of your iOS devices and upgrade from there (you should see an "Upgrade" button on the main screen if you haven't already upgraded). This will move all your existing iCloud CalDAV based to-dos to Reminders. An indication of this would be an empty "Reminders ⚠️" list in iCloud, which would mean you've successfully upgraded Reminders. From there, you can use BusyCal directly to manage your Reminders.

Normally, this would happen when you are running BusyCal on a version of macOS below Catalina, and you're comparing the data you see with another device running a more recent version of the OS, such as macOS Catalina or iOS 13.

Usually, if you see a list with a ⚠️ symbol in its name, or an otherwise empty list with a task titled "Where are my reminders", you have already upgraded Reminders on one of your machines to its new storage format. This storage format is not compatible with older versions of the OS, nor does it sync via CalDAV to 3rd party clients. Data stored in Reminders is now only accessible by a device running a more recent version of the OS (macOS 10.15+, or iOS 13+).

Here are a few things you can try:

BusyCal will show you whatever the Reminders app shows you. Open the Reminders.app to confirm if it's missing calendars as well. If it is, then you have not yet added all the accounts you're expecting to see calendars from.

Open macOS Settings > Internet Accounts and make sure you have all your accounts listed. Tap on each of the accounts and ensure you have enabled Reminders (as this is a per-account setting).